Randy Houser Savors His First No. 1 With Songwriters at His Side

Flanked by the three songwriters who concocted it, Randy Houser celebrated his first No. 1 single -- "How Country Feels" -- Monday afternoon (March 11) at the Honky Tonk Central nightclub in downtown Nashville.

The song's writers are Wendell Mobley and Vicky McGehee, represented by BMI, and Neil Thrasher, affiliated with ASCAP. BMI and ASCAP are the performance rights organizations that staged the celebration.

It was a particularly sweet occasion for Houser, who has been releasing singles since 2008 when he debuted with "Anything Goes" and followed it the next year with "Boots On," the latter of which peaked at No. 2.

Prior to his emergence as an artist, Houser was best known around Nashville as the co-writer of Trace Adkins' 2005 novelty hit, "Honky Tonk Badonkadonk."

BMI's Bradley Collins and ASCAP's Ryan Beuschel co-hosted the party. Collins pointed out that "How Country Feels" was McGehee's third No. 1 single and that she was BMI's songwriter of the year in 2005.

For Mobley, Collins continued, this was his eighth No. 1.

Beuschel noted the song was also Thrasher's eighth No. 1 and that Thrasher has eight cuts on Jason Aldean's current album and four on Houser's.

"How Country Feels" is the first single from Houser's album of the same name on Stoney Creek Records. 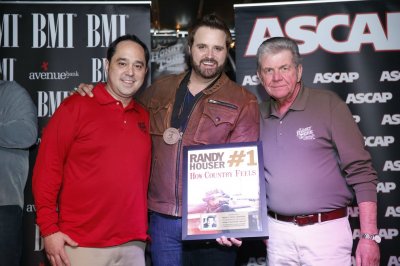