Justin celebrates a No. 1 hit and two gold albums.
ustin Moore had three good reasons to be in a festive mood on Tuesday afternoon (March 12). Justin celebrated the No. 1 success of his single "Til My Last Day" and gold certification for his self-titled debut album and his second album, Outlaws Like Me, at a party at Honky Tonk Central in downtown Nashville.

For the single, Justin and co-writers Jeremy Stover and Brian Dean Maher picked up plaques from their publishing companies and ASCAP along with medallions from the Country Music Association and commemorative cups from BMI. But the "crown" jewel came with a special gift from Justin's record label. Justin and the co-writers each received a bottle of extra-rare Crown Royal whiskey.

As Justin took the podium, he preferred to thank Jeremy and Brian Dean for their contributions to the song along with his record label staff for their efforts on his behalf. "I really don't like being the center of attention," Justin said, smiling, "despite what my wife says. There are a whole lot of people who deserve the same amount of recognition.Thank you so much for hanging with me." 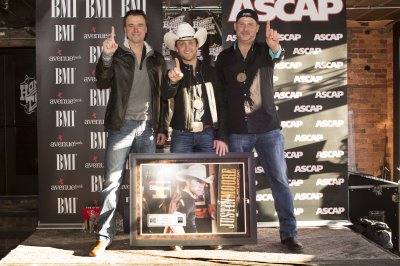